As 2015 draws to a close and we add the finishing touches to our festive campaigns, it felt like an ideal time to take a look back at the past year in both the industry and a few of our own highlights too. It's been another fast-paced year in the world of digital marketing and social media. So grab a festive drink, and dig in as we recap on the year, "Top of the Pops" style!

We started off the year in style, leading the social media strategy for a premium retail brand, which is stocked in major UK supermarkets. We created a strategy to leverage their above-the-line campaign and maximise brand engagement online.

In the meantime, one of the big hitters of the year, mobile, was making the headlines as 'mobile clicks overtook desktop in the UK for the first time', representing a significant shift in mobile for traffic generation, although desktops are still winning out for conversions overall. It was also reported that 2014 online spend in the UK topped £100 billion for the first time, signifying the signs of things to come.

Facebook made history with its touching yet simple first UK television ad on Valentine's Day, tieing in with outdoor ads at Oxford Street station, London.

In Realise news, we started working with an international retailer on their digital UK presence, spanning website, social media, bloggers and content marketing. We also conducted various social and SEO audits and presented another premium food and drink manufacturer with strategies on how to elevate their social media activity to the next level.

We had a lot of fun meeting a range of small businesses at the Business Growth Show, picking up a couple of projects for clients immediately, as well as further developing our local network. We also began working with one of our key clients and production partners, Icarus Media, on their digital activity.

Facebook famously announced the planned upgrade of their Messenger app this month to stand up against the likes of Whats App and Snapchat.

In the Spring we published this blog about our how-to guide, which covers writing and posting an article on LinkedIn; using the new functionality for maximum impact. We've taken a look at our Google Analytics statistics and this post topped the charts in 2015! We also supported a number of small businesses on web, content planning and writing, and social media projects. 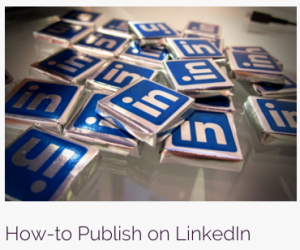 The UK General Election dominated the industry press in May 2015, thanks to the combination of social media (primarily Twitter) and the live TV debates. Many commentated on the influence of social media and any impact from celebrity political persuasion on the results.

This month we also began our partnership with Moonpeel; a unique international platform for artists of a wide range of genres to be seen and found online. Over on our blog, we collaborated with Brum Hour for this guest post about why Birmingham is a creative growth hub,

Throughout June, our projects saw us user testing new websites, as well as running ongoing support contracts. We also lead on SEO and content for the website and email campaign for Joel Richmond CCA.

The Content Marketing Association underlined the insights that data can help provide for content marketers in engaging consumers. At the same time, UK and US brands were being told that they were failing to optimise for mobile.

Amazon celebrated their 20th anniversary with 'Amazon Prime Day,'  a one-day only sale on 15th July that threatened to overtake Black Friday. Almost 400 items were sold every second, with a total of 34.4m products sold on the day. 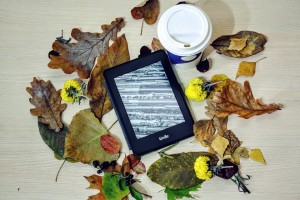 Over the Summer we took part in this inspiring Fireside Chat with Buffer CEO Joel Gascoigne. 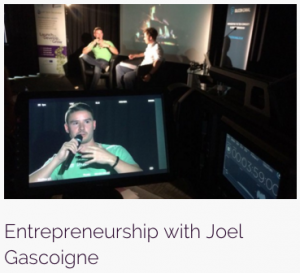 We also expanded on our relationships with agencies, undertaking a client digital transformation review and recommendations project, as well as working on strategy, pitches and proposals.

An Apple event on 9th September was, in typical fashion, one of the top items of live news coverage from the year. Apple launched the iPad Pro, with the Apple Pencil, prompting many jibes on social media.

We also celebrated our first anniversary of the business, which we covered on our blog in the following month.

In the Autumn another of our top posts talked about our first anniversary, our highs and lows and opened the door on our projects and client business sectors. 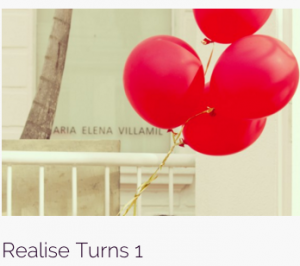 In the social media industry, live video apps such as Periscope and Meerkat came more into the mainstream, partly in thanks to Apple TV and Periscope's instant live TV experience. Periscope's rapid growth to over 10 million users took the industry by storm, prompting thousands of brands to test this platform for both B2B and B2C audiences.

The media was awash in November with Black Friday 'will they or won't they' speculation on which stores would get involved following the 2014 dramas that unveiled. Asda famously declined to take part, choosing instead to focus on year-round savings messages. The big takeaway was a shift to online spend; big news for e-commerce with customers spending over £1.1bn online on Black Friday for the first time in the UK.

We continued to work on support contracts for key clients across November and December, including entertainment, events and retail. We also saw record stats on Twitter, thanks in part to our birthday giveaway. 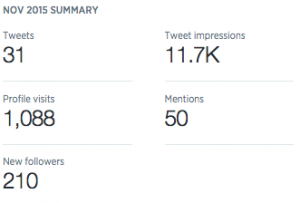 With Christmas just around the corner we weren't short of festive adverts, from the mixed reviews of John Lewis' annual offering to more unlikely crowd pleasers such as Sainsbury's. One of our highlights remains the ever-humourous conversations between confused customers, John Lewis on Twitter (the person), and John Lewis the brand. We're still waiting to hear if John Lewis (the brand) will further leverage the opportunity and grant John's wish of visiting one of the UK stores in real life! 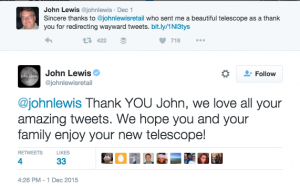 It was the Harvey Nichols advert '#GiftFace' though which scored the highest in emotional response, measured by facial expression recognition analysis. 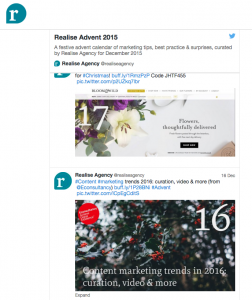 So it's been a busy year in the world of marketing! We're already helping clients look ahead to what 2016 has in store and finalise their marketing strategies. Pop back soon for an update on trends you need to know for 2016.

In the meantime, thanks for reading and happy holidays!