Are you looking to inject some customer romance this Valentine's Day, or just have a look at what some of the top brands are planning? We've scouted around for some sugar-coated inspiration and bring you eight of the best Valentine's campaigns around in 2016.

Top marks for the pun there, Ted Baker! This interactive game Sole Mates, which fans are invited to on the standalone site via social media or via the in-store window displays, is an interactive game to go fishing and 'hook your solemate' to win up to £1,000 shopping spree. 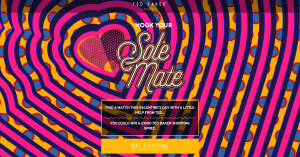 There's also a thoughtful call to action at the end of the game (an area which some brands still miss!), asking for a social share to provide more lives to play again, or to shop by department. 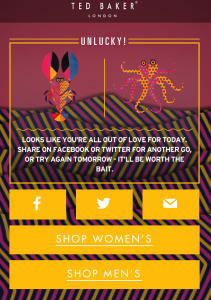 Our verdict - 6/10. Nice campaign with unique creative. Unfortunately this is let down with a browse of Ted Baker's Facebook page (connected with the campaign), which revealed a disappointing customer service response rate.

As reported in The Drum, Virgin Trains are using their Valentine's campaign to promote their re-vamp of trains to the tune of £42m on its East Coast route.

Popular TV celebrity Fred Sirieix (maître d' in Channel 4’s "First Dates") is the face of the campaign, championing both first-class service and his belief in love. The campaign sees Virgin Trains offering singletons a matchmaking high-speed train journey from London King’s Cross to York on the 14th February.

Our verdict - 8/10. Fred's been a busy guy lately, also featuring on Moonpig's Valentine's campaign this year! Virgin's is an effective PR campaign, true to brand and promising plenty of follow-up stories.

In this social media ad, Rachel Morris (psychotherapist / matchmaker) helps Tesco create a basket dating concept; matching up couples based on the contents of their shopping baskets, with mixed results.

Our verdict - 7/10. The concept (for those who buy into it) has been well-received and the ads are well produced with believable stories. Arguably though, their unofficial campaigns have had better success on social media!

In their infamous 'love it or hate it' style, Marmite have combined personalisation with a comedic banning in time for Valentine's Day. They've decided to push their ongoing offer; an app where customers can personalise their product with a name or short saying for £4.99, with a twist, Any customers attempting to enter "the nations most-hated pet names;" ‘Bae’, ‘Snookums’ or ‘Baby Cakes’ will see asterisks appear instead of the words. The site uses the playful call to action 'try it.. I dare you...!" 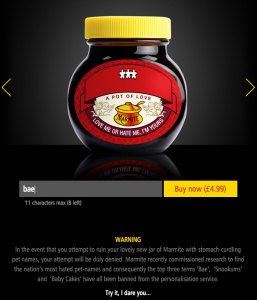 Our verdict - 8/10. Where can Marmite go wrong? This is on-brand, promotes sales and gets away with humour too. We'd suggest further amplifying the joke via social media, asking fans to post their most-hated pet names and continuing to have fun with it.

5. Flower Council of Holland - In case of love at first sight, break glass

In this cute but clever installation in Paris, passers-by are encouraged to 'break glass in case of emergency;' the emergency being that you spot someone that catches your eye but don't happen to have a rose to hand! 1,500 boxes were hidden in well-known romantic hotspots in the city of love, intended to spark conversations and build awareness.

The call to action leads to the campaign website, full of date ideas, inspiration and DIYs.

In the next level of activation, Command Cupid offers a wingman to personally deliver a rose to your potential date, via Periscope, live in Paris and Berlin on 14th February.

Our verdict - 8/10. Cheesy? Check! Effective? Check! Unique awareness campaign which scores bonus points for activation via the microsite, useful and relevant content and tailored use of Periscope.

6. Not on the High Street - #OnlyYouStories

This campaign celebrates customers unique couples stories, supporting their 'not for anyone else' brand proposition. As well as customers being encouraged to share their own #OnlyYouStories, the site features back-stories of NOHS suppliers ('meet the makers') who are in relationships, sharing what makes their partnerships unique. The landing page also includes products featured in the TV ad and links to articles including date night ideas and proposal tips.

Our verdict - 9/10. Top campaign that covers every touchpoint, including sales, and is well-promoted via social media. Heartwarming ads too!

This experiential campaign by Match was inspired by their study, which showed that a third of singles have never slept with someone for the first time completely sober. The 'Johnny be good' machine was temporarily installed at a pub on London's Vauxhall Bridge Road. The concept goes that the condom machine includes a breathalyser which determines the suitability of the punter for a free condom based on the results (those that prove they are under the legal driving limit will be rewarded).

Our verdict - 5/10. Awkward. This campaign installation was meant to be tongue-in-cheek, and intended to gently encourage sobriety in dating and raise awareness of Match.com for finding the 'right type of date'. Unfortunately this one missed the mark - many critics have complained that the idea could encourage unsafe sex, which of course wasn't the intention at all.

Veuve Clicquot's Clicq Call gift box for Valentine's Day lets the buyer record a voice message for the recipient by 'screaming their love'. The prestigious and higher end champagne brand appears to be aiming at a younger market with this campaign, with a megaphone that turns into an ice bucket, ready for a celebration.

Our verdict - 7/10. A pretty innovative idea for the sector, and supported by a vibrant video, this campaign has legs. Unfortunately the amplification on social media appears to be missing, which would translate well through these channels.

So, what are your plans for Valentine's campaigns? It's not too late to start planning a smaller tactical campaign across social, email and web, or to plan some surprise random acts of kindness to thank your top customers, for example.