Should your brand quit social media?

In marketing we all know that there can be times where things don't turn out quite as well as hoped. However we don't usually expect to throw in the towel, knowing that overall presence on the channel or activity helps build the brand value, customer connection and awareness. Testing and failing is also often part of an important evolving learning curve and can help us be more effective in the future.

That's why, when I heard the news last week that cosmetics giant Lush announced a 'step back' from its UK corporate social media channels I was both surprised and confused. And it seems I wasn't alone! With their social following on the affected accounts totalling over 1 million followers, I couldn't help but wonder, was this move incredibly brave, or perhaps, incredibly ill-advised?

I asked some of the UK's top SEO and marketing consultants for their take on the topic and sought to unveil some of the mystery behind the press statement and identify whether it actually makes sense for the brand or the cons outweigh the pros.

Increasingly, social media is making it harder and harder for us to talk to each other directly. We are tired of fighting with algorithms, and we do not want to pay to appear in your newsfeed. pic.twitter.com/nJUzG0lham— LUSH UK (@LushLtd) April 8, 2019

It's clear that, for whatever reason, senior management at Lush haven't seen the true value of social media. This has been reflected onto customers via issues with responsiveness to prospect or customer queries on Lush's channels, which has been a longstanding issue on their Facebook page. It is one thing for a brand to have low social engagement but another to ignore enquiries altogether. Some have also accused Lush of deleting negative comments on their controversial campaigns, such as in the recent police campaign. Either way, the high quality of the brand experience in store is in no way being replicated in their social media management, and for this reason seriously risking damage to brand reputation, especially over time.

Some might say that with this move Lush will have more control, as the majority of Lush-involved customer conversation is to take place via their website; an owned channel. This is certainly something that the team appear to value, with their criticism of complex algorithms affecting organic reach, and the increasing 'pay to play' aspect of social content. A recent statement on their website quotes a figure of 6% organic reach, which is about average.

However, on one hand they gain control of data and reach, but on the other they loose control of their content curation and community engagement. User-generated content is encouraged to take over their hashtag #lushcommunity, (which they now promote as the main resource for product inspiration). The community member @cgritmon sums it up in this message;

Some have intimidated that this shift might reflect a new radical approach to content. By handing over the reins to the uncontrolled hashtag, their content appears to be leaning more towards working with influencers (paid or unpaid). Is this the ultimate test of bravery and confidence in Lush's community following and hoping brand advocates will step in on their behalf? Is it clever and brave or lazy and ignorant? Whilst there are many negatives a brand manager might see in this lack of control, the approach will put more focus on user generated content, and gives the customer a potentially wider platform to be heard. It remains to be seen how seriously Lush will take this in terms of monitoring and customer service investment, or whether the previous low engagement that took place on social media will just continue.

To quote Marketing Land, "the risk is that puts responsibility on the consumer to connect with the brand on its terms." On the flip side, could this be the start of a new trend of mega transparency? Some have argued that this approach could see a turn in the tide of social media. Whilst that remains to be seen, the worrying part of that quote for me is 'on its terms'. Surely brands should be responsive to customers and their preferred channels and not the other way around?

Not all fans are concerned, though. @yaykrystal from the Lush community stood up for the brand, and posted;

"If the new communication model works, it will be Lush heralded as the innovators."

It's certainly going to be interesting to see how this one pans out.

Tried and tested marketing strategy would say that removing or limiting a channel in this way is not a recommended approach. For years, social media has made a valuable contribution to brand awareness, and has become increasingly easier to attribute conversions to. For a B2C brand with an e-commerce arm, this approach is against customer expectations as well as profit-limiting. I have to wonder whether a cost-benefit analysis of this strategy shift was considered as part of the social media audit Lush mention.

"Whilst as individuals or businesses we may switch our platform allegiances and attention from time-to-time, there's a stark difference between subtle dormancy and closing them with a fanfare to advocate a different way of communicating." - James Bavington.

@willscullypower agrees and would advocate keeping both social and customer services open separately; 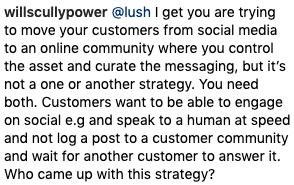 Many have criticised this chan

ge as not being customer centric (including the same follower as quoted above) and instead making life easier for the company. It certainly appears that way when you consider the number of followers across the social channels affected totalling over 1 million accounts. This leap could see them waste time and money rebuilding a following, if they have a change of heart.

"if in the near future a shunned platform like Facebook can innovate and disrupt how brands can engage with their customers; would Lush simply set themselves back up and rebuild an audience?"

Lush customers span a variety of age groups and interests, but two main attributes indicate the potential damage of this move. The demographic tends to be weighted towards younger audiences, as well as passionate people who have been drawn to the brand due to their ethical practices and product range which favours particular causes, for example, fair trade, ethical buying, the environment, vegan and cruelty free. Such audiences may not take the move lightly; the move could really backfire and the impact could be far reaching.

Social media is more than just advertising and branded pages. Most brands appreciate the value that comes from social comes in many forms. By not being active on social media, Lush risks missing all brand interactions, positive as well as negative, and any that may influence product range and development. Social media can work brilliantly to build the relationship between brand and customer when it is a two-way conversation, but Lush's recent announcement can read as if they are only concerned with the one-way communication from their brand page; a very old-fashioned approach that is no longer relevant in these social times. Brands need to be where the conversations are happening, rather than hoping conversations will come to them.

“I don't think this is a good move. No brand is too big to disregard an important piece of the marketing funnel. They have stated 'We don't want to limit ourselves to holding conversations in one place', but isn't that exactly what they are doing with this move?”

By cutting back social media in this way, a gap emerges and the important first phase in the customer journey; awareness, is missing. With the changes Lush is implementing, prospective customers will only get in touch  who are further down the funnel (purchase consideration), and not at the first step, where they are likely to spend most of their time. New customers are likely to dramatically drop as an outcome. This seems very limiting, and like a backwards step for many.

For fans like @lauraemily_r, the loss of the exploration phase of the journey is an important loss of browsing and customer experience that Lush appear to have undervalued;

Social is not a blast tool - it's more complex than that. It's also about generating overall buzz and engagement, in a variety of ways. Why remove your own brand from the conversation? Especially when your brand is market-leading and seen as innovative.  Deactivating social profiles with this many followers is effectively like a premiership football team suddenly playing a season behind closed doors, and invalidating season tickets. The question is, will their fans survive being kept in the dark?

There are many reasons why social media is important for a business. Quality social media should really result in enhancing a brand. Withdrawing from social would only usually be recommended where all other avenues had failed. Perhaps this is the case for Lush, or perhaps they will prove us all wrong!

Some have joked that this is a PR stunt (the brand is starting to see a spike on Google Trends!), or a late April Fools gone wrong... however Lush's latest posts seek to defend themselves, reinforce the message and stop 'chasing likes', so plans are showing no signs of being revoked as yet.

We recommend following social activity on #lushcommunity to see how this gamble works out for the brand.

I'll leave you with some final thoughts from other Lush followers... 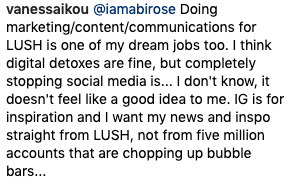 Many thanks to the following contributors:

and the Lush community on social media.